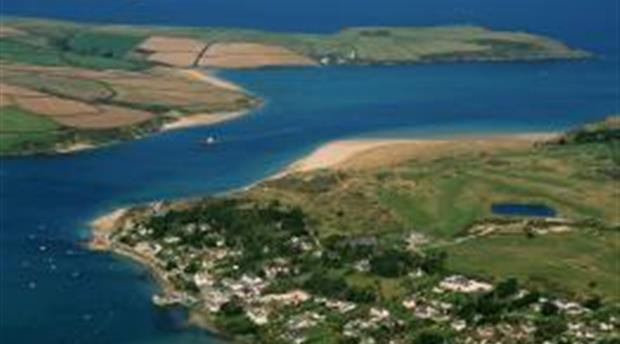 Image by John Such - supplied by Visit Cornwall

The name Rock is thought to have originated from the rock quarry which was used as a source of ballast for sailing boats that had off loaded their cargo at Padstow Harbour. The quarry is now a car park. Rock is a very popular destination for the more affluent tourists and holiday makers.

There are several reasons why tourists are attracted to Rock, from the long fine sandy beach that, at low tide, continues round Brea Hill to the crescent bay at Daymer, to the vast range of water sports that are catered for. Not to mention the five star food and accommodation that can be found at Rock.

Rock has been referred to as 'Britain's Saint-Tropez'and the 'Kensington of Cornwall' due to its popularity with the very affluent and upper-class holiday-makers, including the third in the line of succession to the British Throne, Prince Harry and what the Daily Telegraph calls 'Hoorays'.

Popular names have also holidayed here. Affluent holidaymakers have made use of the nearby helipad. It is now home to some fancy boutiques and upscale restaurants.

Rock Oyster Festival will be back this summer!

Huge news!! for 2022 Rock Oyster Festival are teaming up with Jack Stein to curate a food line-up unlike any other, and their music line-up is also off to a stellar start, with Happy Mondays, Laura Mvula, Passenger, Huey Morgan DJ set, Jade Bird and Rae Morris topping the bill next July.

Rock Oyster is hosted by a different chef each year and Jack, who is chef director across the Rick Stein restaurant group, is gathering his foodie friends to come and cook up a storm at the festival next year. Expect to see famous restaurants popping up in the Chefs Tipis, demos and masterclasses from some of the UK’s most talented chefs and cooks and long-table feasts by the Camel Estuary.

And this is just the tip of the iceberg according to the team at Rock Oyster who are planning for another big announcement in the new year: “This is really just a taste of things to come,” said festival director Lee Bater. “We are incredibly excited to be collaborating with Jack and the team at Steins. The Stein name is synonymous with the best food in Cornwall and we know Jack will bring so much to Rock Oyster. “I couldn’t be more chuffed to be teaming up with Rock Oyster Festival,” said Jack Stein. “Together we’ll bring you chef demos, masterclasses and restaurant tipis with produce from local suppliers at the heart of the action - including plenty of freshly shucked oysters, of course.”

There's a packed programme of events still to announce in the new year including the festival’s full music and chef line-ups, an amazing array of outdoors and wellbeing activities and the family programme.

You can book tickets now for only a £25 deposit, paying the rest nearer the time. Will you be joining us there?