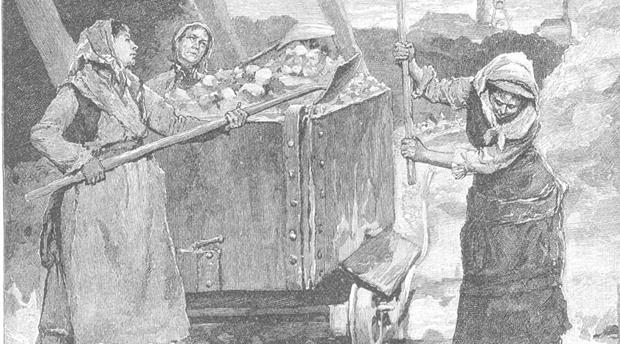 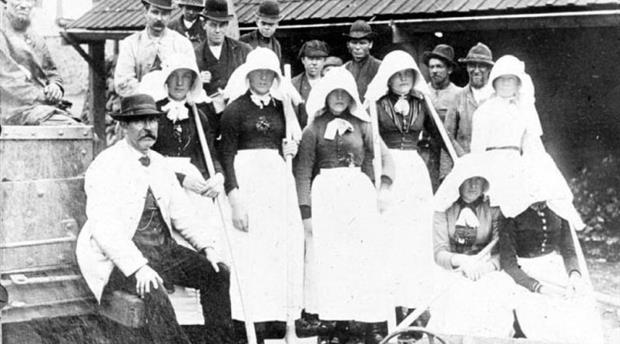 Women and children were probably working at or in the mines from the days of antiquity, but the earliest written records date from the Middle Ages. From this time, at least, it seems that women and girls did not work below ground, but usually dressed ore at surface. They were employed in particularly large numbers from about 1770 until 1860. From then their numbers declined; the last being laid off in the early 1920’s. They were employed throughout the mining industry; at tin, copper, lead, manganese, uranium, antimony, arsenic, iron and zinc mines, as well as at the clay works and smelters. In Cornwall they were often referred to as ‘Bal Maidens’ (the word Bal being ancient Cornish for mining place).

On most mines there was also at least one ‘counthouse woman’ who was responsible for the cleaning, cooking and laundry. There were also some female waggoners, assayers assistants, whim horse attendants and even one ‘kibble’ (ore bucket) lander. In the mid 19th century a few even became mine or clay works managers. Some women also took over ‘mens’ jobs’ at the clay works in World War 1.

Women and girls were also employed in the gunpowder mills, safety fuse works and dynamite factories. They often constituted the majority of the workforce, and were at continual risk, as is evidenced by the high proportion of females amongst the accident and fatality statistics.

Due to growing concern at the plight of children working in the mines of the UK, a Royal Commission submitted a report to the Government in 1842. Dr. Charles Barham (a mine surgeon) collected evidence for the inquiry from some of the Cornish mines. In the course of this work he interviewed 22 bal maidens in 1841, some of these are transcripts are shown below and give a brief glimpse into their lives.