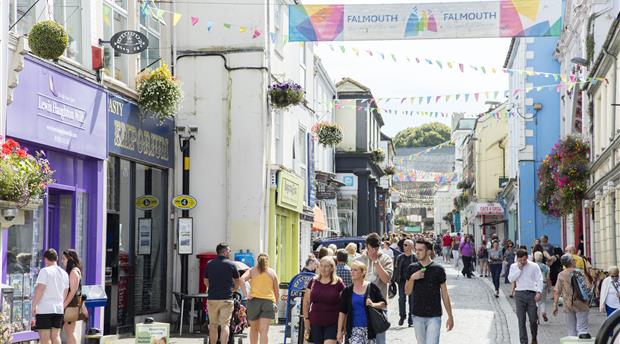 Henry VIII built Pendennis Castle to defend the Carrick Roads in 1540, which, together with St Mawes Castle on the east side meant that the estuary entrance was well guarded. Sir John Killigrew created the town of Falmouth shortly after 1613, which received a charter from Charles II in 1661. A new church was consecrated in 1665 and there was soon a cluster of a few hundred homes around the Church of “King Charles the Martyr”.

In 1688, Falmouth was made the Royal Mail packet station. In 1805, the news of Britain's victory (and Admiral Nelson's death) at Trafalgar was landed here at the steps of Fishstrand Quay from the schooner, H.M.S. Pickle and taken to London by stagecoach.

The development of Falmouth Docks began in 1858 with the first ship entering in 1861. The railway reached the town soon after, in 1863. This brought prosperity and also tourism to the town. Perhaps surprisingly, Falmouth boasts three railway stations; Falmouth Docks, Falmouth Town and Penmere.