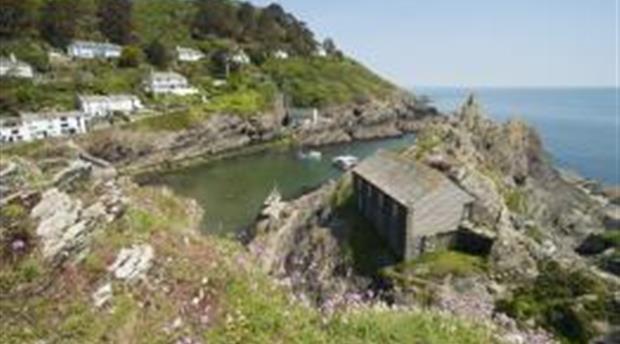 Polperro is a 13th century fishing village, originally belonging to the ancient Raphael manor mentioned in the Domesday Book. Fishing has been the principal occupation of its inhabitants for centuries, and pilchards were often caught in abundance to be sold far and wide.
When Britain was at war with its neighbours in the 18th century, duty on many goods was increased considerably, encouraging the Polperro fishermen to smuggle goods such as tea, gin, brandy and tobacco across from Guernsey.
Even the Methodist preacher John Wesley remarked after visiting Polperro in 1762: "An accursed thing among them: wellnigh one and all bought or sold uncustomed goods."

To be successful, smuggling had to be properly organised. Ships had to be loaded and unloaded, often in winter or at night without lights, and to land a cargo in Talland Bay in foul weather would have been no easy task.

The man who arrived in Polperro to manage the smuggling trade was Zephaniah Job. He changed the life of the village, for he was to become the greatest single benefactor in its long history. Over the years, Job acted as advisor, accountant and banker to many of the inhabitants as well as the local gentry. He even hired lawyers when the Polperro smugglers appeared in court.

Privateering by Polperro boats, licenced by the Admiralty to attack and capture enemy ships, also brought great wealth to many Polperro families during the latter half of the 18th century. The privateers often combined official business with smuggling, returning with cargoes of contraband to sell ashore.

In 1798 a Polperro boat called the Lottery was involved in an incident in which a Customs Officer was killed. One of the crew, Tom Potter, was later tried for murder at the Old Bailey and executed. As a result, the smuggling trade that had once thrived in Polperro began to diminish as Revenue officials determined to put a stop to it.

Zephaniah Job's bank continued in Polperro until his death in 1822, and he was able to rebuild the harbour after it was destroyed by a violent storm in 1817.

In later years, Polperro became one of the most popular resorts in Britain for artists and visitors alike. Some of the earliest photographs ever taken feature its inhabitants and their occupations, many of which can be seen at the Polperro Heritage Museum in the Warren.